Spirits in the air

That whip up a frenzy

With limbs flailing about

Built from its banks

Nothing is ever without its gaze

It informs others of my whereabouts

And all this, lies outside my flat

A burst of indistinguishable colours

Beam up from my chest

Replacing the old, and decrepit

Greedily hunting down the source

To become the new light

To paint all I see

With my own colours

From my own palette

And the priests exclaim

Left in the sand

Stretching on and on

Filling in with their paintbrushes

Painting over everything they touch

With shells, seaweed and life

A billion eyes watch from their TVs

Experiencing life behind a screen

I sip my cider and sigh:

“Life is only as hard as I make it.

It’s actually quite easy, I only have to breathe.”

I want to feel

And love of life

A torrent of life force

To hold me by the shoulders

And shake me, shake, shake

Until my soul leaves its lips and flies, flies

Flitting this way and that

Feeling the sun on its wings

As it soars ever higher

Broken shards of a mirror

And a sinking feeling

That takes me deep, deep down

To the bottom of the sea

Air bubbles of memories rise around me

I look closer, and see memories

Memories of all of them and all of me

Deeper and deeper I sink

Until I hit the seafloor

And, what is beauty but trickery?

What is sight but endless anxiety

All those that possess it

Give fear and feel fear

Gentle whispers roll about me

The rolling beat of the currents

Tossing me this way and that

The fish smell me out

And come for me

Ready to take me into their stomachs

Until I am a part of every single fish

I can see through their eyes

And I do see misery

I see myself a thousand billion times

And my heart aches, it aches

A thousand billion times, I wish I could throw this link between all my selves

But I can’t stop living, and they won’t stop eating and shitting

An old man walks outside

With a can of beer in one hand

He talks to himself

And laughs with himself

He is all the company

While I sit here

With holes in my soul

That only company can fill

I looked at my picture

And so does everyone else

Something I thought long dead

The walls are crumbling

Walls built by my own hand

All that I had built up

I hope the walls stay down

Joe sipped on his cappuccino, huddled up in the corner at the cafe. His eyes were flitting from one person to the next. When their eyes met his, he immediately shifted his line of sight to the floor. Feeling his cheeks redden. “What am I doing here? I shouldn’t be here.” He could see people meeting up, gossiping. Maybe talking about their colleagues at work, or office romances. He could see families, parents with their young children running amok. “I should leave, this isn’t working.” He downed the red-hot cappuccino which then burnt his mouth. Wincing, he got up to leave the cafe. Feeling every persons eyes boring into the back of his head. Joe made his way down to the harbour to where he parked his ride. Floating just above the water, was his hovercar. As he switched on the keys, the door opened and a ladder extended to the harbourside.

Joe stepped into his vehicle. From the dashboard, he could see that there was about a half-charge left. “Should be enough for at least the return journey.” “Where to, Mr Sans?” the hovercar’s built in AI asked politely. You could set the modes and personality of any AI in your possession through the bots app. Joe Sans preferred a polite and deferential female voice. It calmed him, made him feel like he had some sort of power. “Back home please, Charlotte.” “Of course Mr Sans. Would you like to take your medication now, or at home sir?” Charlotte added sweetly. The hovercar took off from the harbour, lifting up above the city. “Yes please, Charlotte.” “Please prepare your arm, Mr Sans.” Joe rolled up his sleeve. A knotted mess of healed over scars, making it virtually impossible for human beings to administer meditation via needle, for lack of finding a vein. A jab attached to a robotic arm appeared out of a flap by the dashboard. Joe looked down out of the window at the city. Streams of hovercars below him in various lanes of controlled air traffic. Traffic lights still existed, floating about mid-air. Below he could barely make out the citizens that scuttled about in the city. So small now, it brought Joe a feeling of introspection. The robotic arm jabbed his arm, bringing him out of his thoughts. The sharp pain irritated him momentarily. He then relaxed back into his seat. He could feel the medicine flowing through his veins, relaxing each part of his body. This brought about an involuntary groan of pleasure. Charlotte materialised out of thin air into the seat next to him and the hovercraft’s robotic arm retracted back into the flap.

The dashboard displayed the route time. “20 minutes and 29 seconds”. “It’s good to see you Mr Sans!” Charlotte’s eyes beamed. Her whole face did. Joe felt immediately comforted. His anxiety, now slipping away. He was safe and sound, in his hovercar, with Charlotte. Joe raised his arm. He opened up his forefinger and thumb and a small screen appeared between them. He tapped on his bots app. Once the app loaded, he selected Charlotte’s profile. Looking up at Charlotte he took in her features for a moment. She was a pretty thing. She had jet black hair, huge glowing eyes with lips parted slightly. A small face and a petite body. She sat looking at him, unblinking, but smiling. Joe looked back to his bots app, swiping left with his fingers, looking through the various default skins that the bots app provided. He found one he liked, and clicked on it. Within an instant Charlotte’s appearance had changed. She now had long blonde hair that hung down, barely covering her huge breasts. She was now tall and had a gorgeous figure. “Hmm.. A bit too much for me. Maybe back to what you were.” Joe swiped back to Charlotte’s previous skin and selected it. Charlotte, now back to her original self again, was still looking at him, still with the seemingly unthinking and adoring smile. “There, that’s better. You look great Charlotte.” “Thanks Mr Sans!” Charlotte beamed. “Hmm.. Maybe I should change the personality a bit. A bit too servile for me I think.” Joe scrolled down to the personality tab on the bots app and started swiping through the different personality types. “Hmm.. Arsy? Why would anyone want that? What’s wrong with people. Lets see.. Bossy, kind, thoughtful, reflective, sexy.. Sexy, that sounds interesting.” Joe had an idea. On the dashboard, he dimmed the windows, blocking anyone from seeing inside the hovercar. He looked at the dashboard. “17 mins and 45 seconds”. “Plenty of time” Joe grinned to himself. He set Charlotte’s personality to “Sexy” and her current mode to “Prostitute”. Charlotte’s polite demeanour dropped suddenly, and her eyes suddenly locked on with his. She smirked at him, lustfully. Crawling over the seats to get closer to him. “Hey Joe.. “.

When he finished with her, she asked him: “Are you satisfi-” Joe deactivated her temporarily, she disappeared. Perhaps later, Joe would delete his history on the app. If he remembered, later on. His hovercraft rolled up to his apartment. The ladder stretched out to his apartment door. The apartment complex was built sky-high. Literally, in the clouds, or higher than the clouds. Space was increasingly limited these days. Life, was becoming very crowded on earth. Joe climbed across the ladder, into his apartment. The door recognised his appearance “WELCOME HOME MR SANS.” The door cheerfully said. “HAVE YOU TAKEN YOUR MEDICINE?” Joe ignored the door and carried on inside. The place was a mess. Since he had no contact with people, he had no reason to tidy up. The washing up was piled up in the sink. Dirty clothes were strewn about. “Wait a minute” Joe thought, “Doesn’t the bot app also have cleaning capabilities?” He reactivated Charlotte and she materialised before him. “Hi Joe.. You want some more..?” She winked at him. Preparing, she made her way to the sofa and bent over with her ass wiggling in the air. “Oh shit, I forgot. That would of been awkward if someone was here.” Charlotte was looking over her shoulder. “I’m ready big boy..” Joe blushed and felt ashamed. He opened the app with his forefinger and thumb, setting Charlotte’s mode to “Cleaning” and the behaviour set to “Docile. Charlotte immediately hopped down from the chair and started picking up clothes. “Hmm.. Better if I delete my history, just in case. Where is it in this app..” He scrolled up to the navigated bar, tapped on settings and selected “User History”. He then clicked on the “Delete all history” button. Charlotte paused suddenly. Her face contorting with pain, her whole body spasmed and convulsed freakishly fast as if in fast motion. Her mouth wide open and screaming silenty. She stopped, corrected her posture and stood upright. Then, she went about to her various tasks. “Right, now that’s sorted. I better give my therapist a call.” Joe spread his fingers again and spoke the words: “Call: Therapist, Mode: Video.”

The phone dialed and connected immediately. With his therapists face and his on the screen. “Joe! How are things? Did you manage alright?” Joe’s therapist Laura asked, enthusiastic as always. “Well, the experiment went okay! I even managed to talk with a girl! Managed to get her number too.” Joe lied. He knew his therapist would know he was lying too. He blushed hard. He felt like a schoolboy again, about to be caught in some misdeed. “That’s good news! What did you learn from this experiment, Joe?” She eyed his face, trying to break past it and into his mind. Joe felt this, and averted his eyes down to the floor. “Oh, you know, that it’s not as bad as I thought!” His therapist looked unconvinced. “Call me next week, and we can discuss what to do next. Talk soon, Joe.” She hung up. Joe was left looking at himself in the video chat. He felt a gnawing, growing feeling of shame. Embarrassment and disappointment in himself.

“I am a coward.” Joe croaked. “What was that, Joe?” Charlotte asked. “Oh, nothing Charlotte, nothing.”

I can feel the air

I can move inside of it

I can sense the currents

Surfing around my skin

I find myself resurfacing

Only to dive right back in

To feel the cold sea water

My hands reach to the bottom

I rise to resurface again

Lifting my hands up to the sun

Melt away from my palm 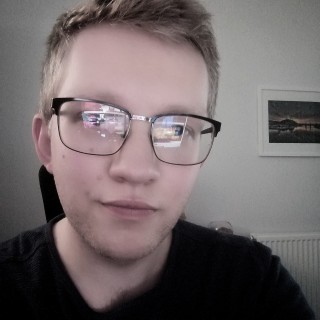 Born in Torbay, living in Bristol.